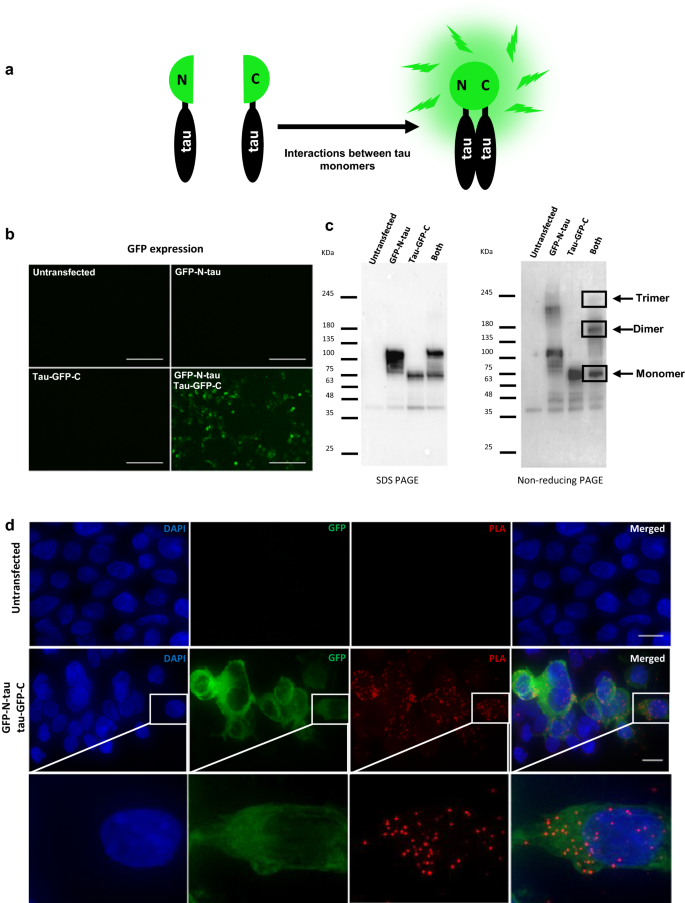 Background:
Multimerization is a key process in prion-like disorders such as Alzheimer’s disease (AD), since it is a requirement for self-templating tau and beta-amyloid amyloidogenesis. AT8-immunohistochemistry for hyperphosphorylated tau is currently used for the diagnosis and staging of tau pathology. Given that tau–tau interactions can occur in the absence of hyperphosphorylation or other post-translational modifications (PTMs), the direct visualization of tau multimerization could uncover early pathological tau multimers.
Methods:
Here, we used bimolecular fluorescent complementation, rapamycin-dependent FKBP/FRB-tau interaction and transmission electron microscopy to prove the in vitro specificity of tau-proximity ligation assay (tau-PLA). We then analyzed MAPT KO and P301S transgenic mice, and human hippocampus and temporal isocortex of all Braak stages with tau-PLA and compared it with immunohistochemistry for the diagnostic antibody AT8, the early phosphorylation-dependent AT180, and the conformational-dependent antibody MC1. Finally, we performed proteinase-K treatment to infer the content of amyloidogenic beta-sheet fold.
Results:
Our novel tau-proximity ligation assay (tau-PLA) directly visualized tau–tau interactions in situ, and exclusively recognized tau multimers but not monomers. It elicited no signal in MAPT KO mouse brains, but extensively labelled P301S transgenic mice and AD brain. Two groups of structures were detected, a previously unreported widespread small-sized diffuse pathology and large, neurofibrillary-like lesions. Tau-PLA-labelled diffuse pathology appeared from the earliest Braak stages, mostly unaccompanied by tangle-like tau-immunohistochemistry, being significantly more sensitive than any small-sized dot-/thread-like pathology labelled by AT180-, AT8- and MC1-immunohistochemistry in most regions quantified at stages 0-II. Tau-PLA-labelled diffuse pathology was extremely sensitive to Proteinase-K, in contrast to large lesions.
Conclusions:
Tau-PLA is the first method to directly visualize tau multimers both in vitro and in situ with high specificity. We find that tau multimerization appears extensively from the earliest presymptomatic Braak stages as a previously unreported type of diffuse pathology. Importantly, in our study multimerization is the earliest detectable molecular event of AD tau pathology. Our findings open a new window to the study of early tau pathology, with potential implications in early diagnosis and the design of therapeutic strategies.