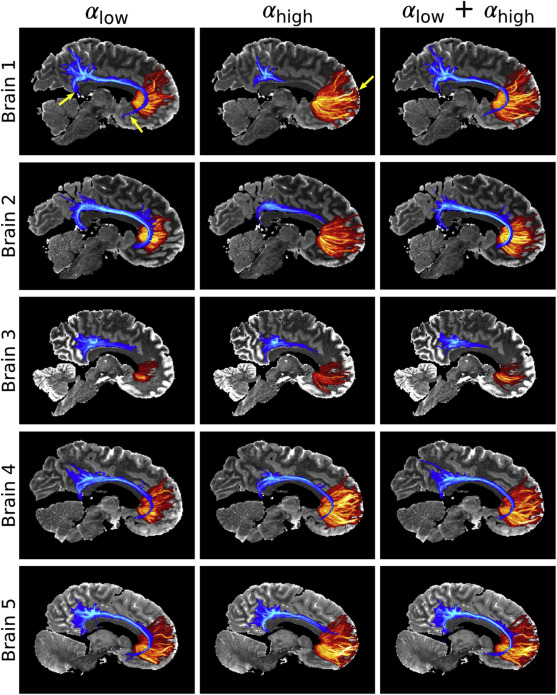 Diffusion-weighted steady-state free precession (DW-SSFP) is an SNR-efficient diffusion imaging method. The improved SNR and resolution available at ultra-high field has motivated its use at 7T. However, these data tend to have severe B1 inhomogeneity, leading not only to spatially varying SNR, but also to spatially varying diffusivity estimates, confounding comparisons both between and within datasets. This study proposes the acquisition of DW-SSFP data at two-flip angles in combination with explicit modelling of non-Gaussian diffusion to address B1 inhomogeneity at 7T. Data were acquired from five fixed whole human post-mortem brains with a pair of flip angles that jointly optimize the diffusion contrast-to-noise (CNR) across the brain. We compared one- and two- flip angle DW-SSFP data using a tensor model that incorporates the full DW-SSFP Buxton signal, in addition to tractography performed over the cingulum bundle and pre-frontal cortex using a ball & sticks model. The two-flip angle DW-SSFP data produced angular uncertainty and tractography estimates close to the CNR optimal regions in the single-flip angle datasets. The two-flip angle tensor estimates were subsequently fitted using a modified DW-SSFP signal model that incorporates a gamma distribution of diffusivities. This allowed us to generate tensor maps at a single effective b-value yielding more consistent SNR across tissue, in addition to eliminating the B1 dependence on diffusion coefficients and orientation maps. Our proposed approach will allow the use of DW-SSFP at 7T to derive diffusivity estimates that have greater interpretability, both within a single dataset and between experiments.