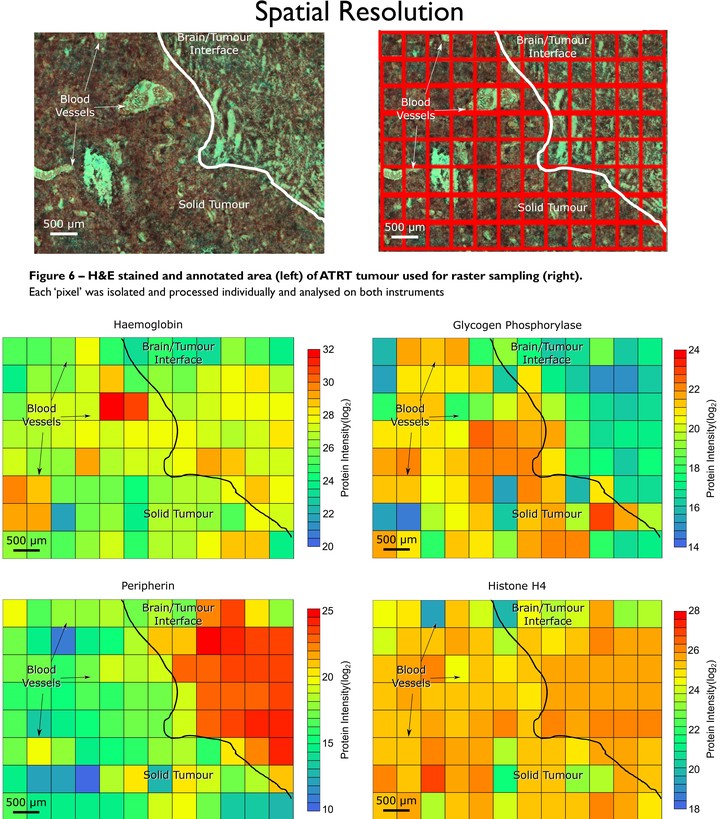 Tissue-based proteomics approaches often lack spatial resolution and the data generated gives little to no knowledge about the heterogeneity of the tissue structure. The isolation of cells of a single phenotype or small regions of tissue can ease the signal averaging issues seen when taking ‘bulk’ measurements of diverse cell populations. Here we apply a sensitive, spatially resolved workflow for the proteomic analysis of a tumour to identify proteins that display spatial expression patterns within the tissue in an unsupervised manner.

We identified approximately 4000 and 2000 proteins in total from the low throughput (60-minute gradient) and high throughput (11.5-minute gradient) approaches respectively, with batch run times of 8 days and 1 day. The regions sampled included the tumour solid core, brain/tumour interface and blood vessels. Using a permutation test for Moran’s I, a measure of spatial autocorrelation, 526 and 273 proteins were identified as displaying significant evidence of spatial autocorrelation in their spatial expression profiles. These proteins include examples of blood proteins, tumour and neuronal markers and these proteins show an enrichment of Gene Ontology terms related to tumour and vascular biology.